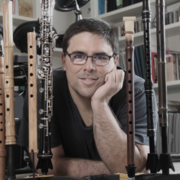 Tell us about yourself

Javier Márquez is a musician born in Córdoba. He has been influenced by different styles such as classical music, New Age, folk, World Music and certain types of fusion. He composes, arranges and produces his own pieces of music and participates in the recordings of other musicians providing guitar, oboe, ethnic flutes, Armenian duduk, Bulgarian kaval, whistles, soprano sax,.. WINNER Hollywood Music in Media Awards in New Age/Ambient category in 2021. He releases in 2021 his last album "The Shelter Point". WINNER double Silver Medal Global Music Awards 2022 "The Shelter Point" Best New Age and Album categories. Recently he has recorded Armenian Duduk for Season 5 of “Money Heist” (La Casa de Papel-Netflix) together to Budapest Symphony Orchestra. He has participated as featuring artist in the recording of track "Sirdes Mouté u Tapour" from the last album "Ara" of the prestigious violinist Ara Malikian. He participed in the recording “Ideario” in 2018 and produced and played in the next album IKIGAI (2022) of Pipo Romero. He participated in the recording of Pavel Urkiza's “La ruta de las almas” project and part as a component "La ruta de las almas" Band, and it was presented in EXIB music in Bilbao in 2014 and Global Cuba Fest in Miami (USA) in 2016. He collaborated in the recording of the soundtracks of the composer Pablo Cervantes for the film "Jaulas", "El Prenauta" and Promesas de arena for spanish national TV and Amazon Prime Video.

What are your objectives and goals?

Meet and interact with other artists of the genre. Get to know other ways to share my music. Learn about calls for awards, concerts and record releases about the New Age genre.

What is your involvement with New Age Music

I compose New Age Music. Always Childhood I was listening this music genre.

You need to be a member of The New Age Music Circle to add comments!

This reply was deleted.